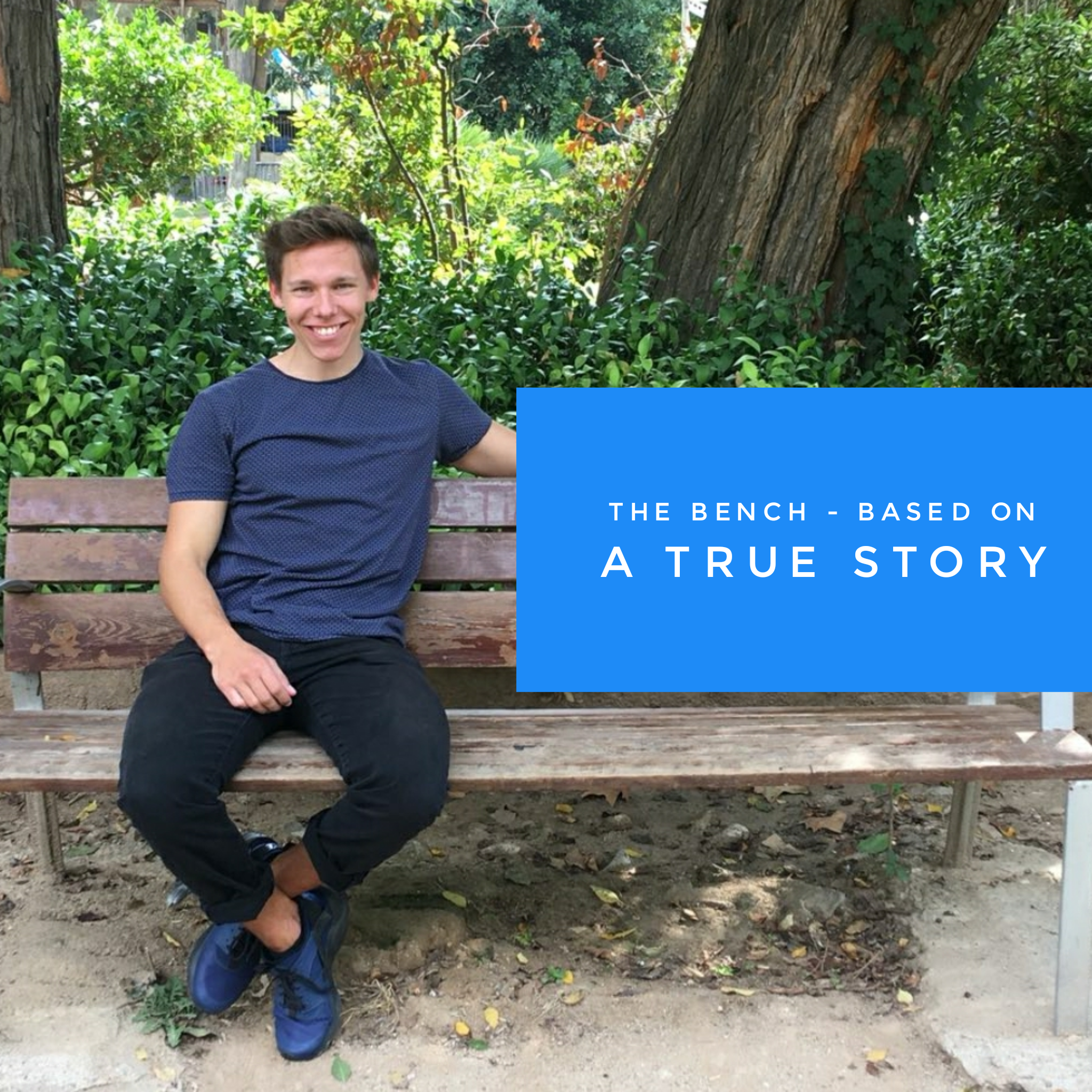 He sat on a bench thinking about life and his dead wife.
65 years with her. Now, she was gone. Forever.

The bench had been their place. Even though it was a public bench, they felt home there. Without his wife sitting next to him, he felt like a stranger in New York. He started to cry.

People passed him. Some took notice; some didn’t care. Most of them didn’t know what to do. He felt the same, over the last 65 years he has been with his wife, they had some fights, but most of the time they shared a soul.

They came from an era where broken things got fixed and not were thrown away. Now he felt that nothing ever could fix him.
He watched tourist passing by. He closed his eyes.

He could not bear seeing them without playing the game, his wife and him used to play.
They used to observe the tourists and guessed their background and their origin. Some were easy to guess, some were more different, some impossible.

The Asian people often came in groups. His wife spent six months in Japan, where she learned a bit Japanese. She could distinguish between Japanese, Mandarin, and other Asian languages. When a group of Asian tourist passed, he let his wife listen, and she told him their origin. The same they did with people from Russia and the Balkan area. In war, he had fought against Russia. Anyway, two of his best friends were Russian. They taught him a few words until he took a Russian course.

Harder to distinguish were people from the US and Canada or people from Venezuela and Colombia. The easiest to identify were Italian, Greek, French, Portugues, German, Spanish, and people from the UK. On the one hand, because they were many, many tourists from this countries. On the contrary, because they were just too different. The complaining way of going and gesturing from Germans, the movement of the hands and arms from Italians. All that were stereotypes, but to a certain degree they are true.

He smiled thinking about those memories.
After a few seconds, he opened the eyes again and saw the empty place at his right. 45 years they have lived in this city. On their first date in the city, their walk after dinner had ended at this bench. They sat there, till 3 in the morning, talking, laughing, kissing and keeping silent.

You know you have found the right person when you can share the silence together, and it feels like you are talking to the person through your soul. When they kept quiet, on the one hand, he could not wait till she started to speak again, so he could listen to her beautiful voice. On the contrary, he wanted to keep the silence as long as possible to stay in the pleasant anticipation of hearing her voice.
And anyway, maintaining silence with her was better than talking to anyone else.

Now the only thing he could do was remembering all the moments they shared.
It took him one month, till he had the strength to visit their bench.

Now he did not ever want to leave the place. He felt awful, but he did not want that anyone else ever sits on their bench, at the place that belonged to his wife.

A few meters next to their bench there were other benches. Those did not have the view their’s had. The view on the big plaza where tourists scrimmaged like ants.
From the other benches, you could not see the big tree and the even larger church that was standing behind it.

Damn… How they loved this tree. They dreamt of having one in their garden when they once had moved out of the city. They never did move out though, and secretly they knew that they never would. They loved the city too much.

It was nice, dreaming and creating their dream house and garden. When you are old, you need to have dreams, too. However, to be able to dream relaxed, it is necessary that you have realized a lot of dreams during your lifetime.
Otherwise dreaming does not feel comfortable and turns into regret.

They both had achieved their goals as a couple. That is why creating their dream house, was fun and comfortable. Sometimes they went to IKEA, pretending that they would turn their dream into reality. After a few hours, they went home, and in their minds, they had bought new garden furniture. At night time they returned to their bench, observed people, spoke about their house, and kept silence together.

Thinking of all those memories, changed his mood for the better. But when he got back to reality he felt even worse. Beautiful memories are beautiful but if you are not able to make new ones they hurt.
And now they did hurt. Tears came up his eyes, but he didn’t want that other people saw him crying. He did not wish for attention; he wanted to be alone, as alone as someone can be in a big city with tons of tourists.

On the bench near to their bench a tourist sat down. He seemed to be from Germany.
He opened his bag and pulled out a big bottle of water and a Banana. He felt as if the tourist was taking notice that he is sad.
He turned around so that the tourist could not see his face. Now, he was back in reality. He cried as silent as he could.

The tourist drank and ate his food. He stood up, the paring of the banana in his hand and neared the garbage can that was next to their bench.

No reaction. He couldn’t help him.
The tourist went back to his bench and stayed there for a few minutes.
He noticed that the tourist threw a look from time to time.
He felt good about it. Not so alone.

He felt that the game has changed.

Now a tourist was watching him, thinking about him, what state of mind he was in. He smiled. His wife loved this little switches that life shows. With her, he could talk about anything.
The most he appreciated that he could speak with her about serious topics and the opposite, funny stories. They never talked about things they could not change; politics rarely were a topic.

That the tourist was there, with a bit distance, made him feel a bit better.
Someone who cared was nice. And so it did feel. Even when he was a stranger, a tourist, it was nice that he asked how he was feeling. He felt sorry for the guy that he could not answer him.

His wife and he, they never had children. At least no children that had the fortune to live longer than five months. When his wife was 28, she miscarried for the first time.

One year later again. With 30 his wife finally gave birth to a child. It was a boy. They were as happy as one human being can be. Holding your child in your arms, is there anything greater?

They called the boy Marvin. An unusual name in these times. Marvin had a smile that brought a smile on his wife’s face that he had not seen before. It is just nature. The feeling of a woman carrying her child, feeling it’s neediness and helplessness, exploring the unique bond between each other.

Marvin died when he was five months old. The medics did not know why. In these times the medicine was not that developed as it is today. They thought he could have had a congenital heart defect. The uncertainty made it even harder for his wife. She never got over it completely. It took two years till she could smile again with all of her heart.

For him, that has been the best day ever. Their life had a new start. They never again tried to have children. He was happy with that because he did not know if he again could see her wife suffer that much, taking care of here while he self-suffered.

They started to care for his brother’s children from time to time. They took them on vacations, on day trips, and baby-sit them when they were young children. It was not the same feeling as caring for their children. However, it felt great.

When the tourist on the other bench moved, he was taken out of his daydream. He saw the tourist grabbing his water bottle and putting it in his bag. The tourist stood up and walked again in his direction. He thought, how Marvin would have looked like as a young man.

‘How are you, Sir? Can I help you with anything?’
He turned his head into his direction. His eyes, however, passed the tourist and looked at the big tree in front of the church.
‘I am fine,’ he answered. After a short break, he looked into the tourist’s eyes and said: ‘Thank you.’ The tourist nodded as if he understood that he wanted to be alone, and moved.

‘I am fine.’ The most stupid answer on the question how are you. The only answer he could give.

According to the tourist’s accent, he was not from Germany but must come from Italy. He began to laugh. His wife always got the Italian people right. She never picked them wrong. When he saw an Italian, she gave him a lovely, but strong clap on his shoulder and whispered in his ear: ‘Haa, another Italian.’ Then she kissed him on his cheek.

Memories. Beautiful memories from the years he and his wife sat on the bench. Their bench. Their place. Their love. Their life.
The only life he knew.

My grandchildren, your generation – What do you do?

The old man at Montjüic