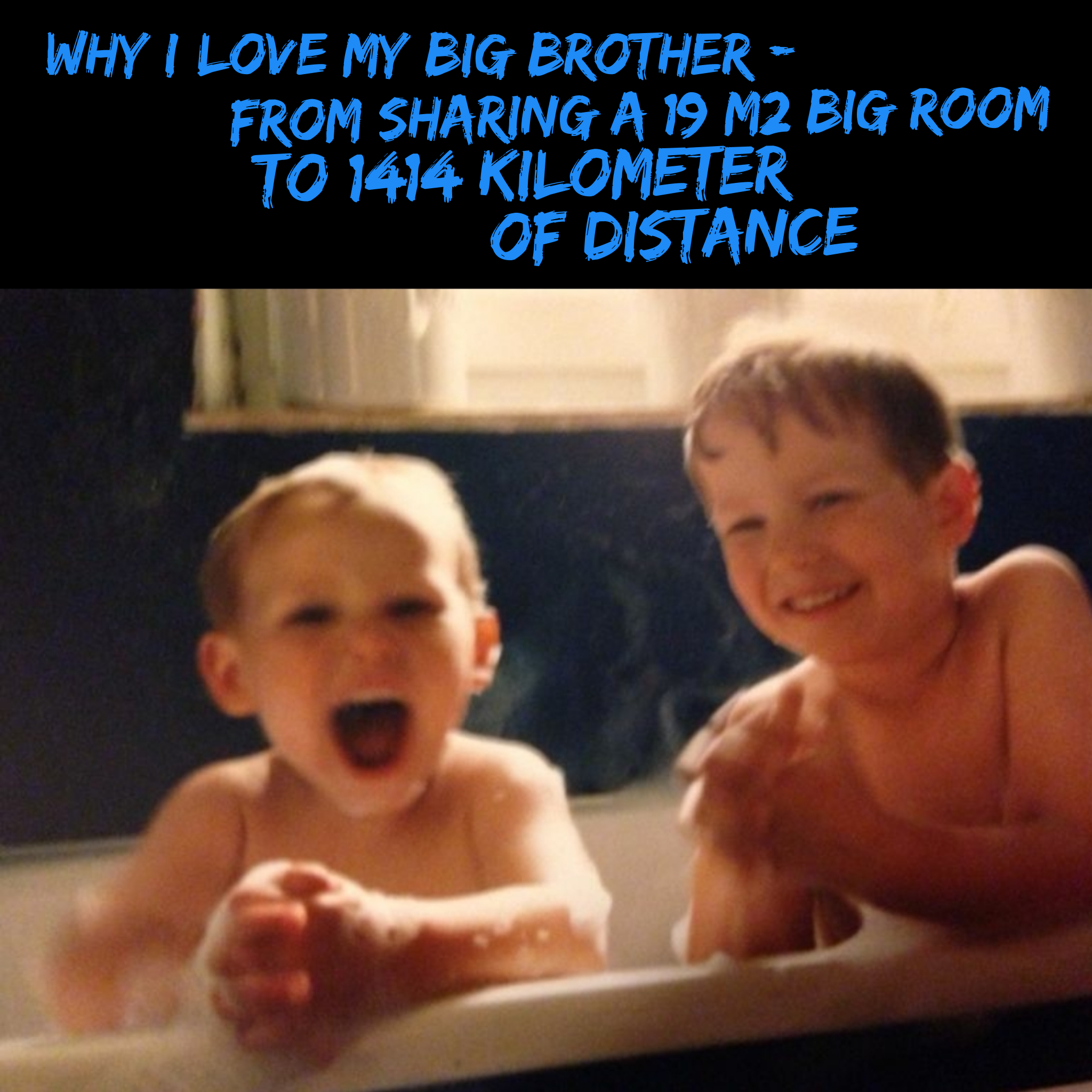 My big brother and I share an unbreakable bond.
We lived 18 years in the same room. For 18 years we shared 19 m2.

My big brother is the one human I spent the most time around.

My big brother is one of the persons that shaped my life the most.

When I was young, I often watched him play video games. I enjoyed watching him more than I did playing.

Didn’t my big brother had played football, my life would have gone a completely different way.
When he was 4 years old, he signed up for a club.

One and a half years later, I signed up for the same club and started my football career as a goalkeeper. For two years we played in the youth team together. Afterwards, because of the age difference, it was not possible anymore. Nevertheless, I sometimes helped out in his team.

The time we had no training sessions, my big brother and I played football together. In a parc, where a tree and a jacket built the goal, or in our garden, where we had an own goal.

Countless hours me and my big brother playing football. Countless teams, we destroyed together.
There is an invisible bond between every sibling. Between my brother and me, this bond is exceptionally strong on the football pitch.

Football is the one thing that brought us together.
One time though, it made me cry. During the 2002 World cup when Spain lost against South Korea in penalties, my brother was teasing me. I ran into my room and cried.
My brother is a big Arsenal supporter. 2006 Barcelona won the Champions League against Arsenal. Hard days for my brother.

My big brother and I are the opposite of a lot of things. At the same time, we complete each other. During our childhood my brother liked to be on the stage, during family reunions he enjoyed talking stories, making jokes. I almost never did say a word. But I was totally fine that my brother got the light, I enjoyed to keep silent.

As I am an introvert, I gain energy spending time alone. Apparently, during the time living with my brother, it was difficult getting time on my own. But most of the time I did not need it. With my brother around me I felt fine. When your siblings are not around you, you feel weird and lonely.

We went to the same school. Everybody who has bigger siblings that went to the same school knows this scenario: You have a teacher, your big sibling was already taught by; the teacher already has a picture in mind of what to expect, what you would be like. He thinks you are the same as your sibling.
My brother was brilliant in school. I was more like on the family reunions; I did let speak others. Teachers were surprised when they got to know me after knowing my brother.

Sharing with my big brother a room was sharing the room with one of my best friends.

When you share a room, you listen to the music from each other. Obviously, you can listen via headphones, but I can’t remember that one of us ever did that.
One played music, and both listened. As my brother is older than me, he first got into listening to his music. Because of him, I started listening to Hip Hop and R n B.

One of the albums that we played a ton was Future Sex Love Sounds from Justin Timberlake, as well Kid Cudi’s A kid named Kudi was big back in the days.

End of 2012, a half year after our parent’s divorce he recommended me an album Good Kid, Maad City. I remember that he shared it on Facebook. (Yeah, that time you really shared music you liked on Facebook.)
Kendrick Lamar is since then one of my favorite rappers.

We had one TV in our room. (We are talking about 1993-2011) Smartphones and tablets were no big deal to watch things. That is why we often watched films and series together. One night he showed me the new series everybody was talking about. How I met your mother.

Since the first episode, we were junkies. Now, every time I listen to the intro music, I feel home and safe, because I am back in the childhood, back in the room with my big brother, tired, lying in bed watching a series, ready to share laughs.

We watched Prison Break together – the ultimate story about brothers where one brother is falsely accused, and the other helps him to break out of prison.

He is my big brother.

Brothers never let each other down.

Brothers may not talk for a while, but then sending one little pic, one second of a song, and are both back in childhood.

On this level, this is only possible with siblings.

When my parents separated, my brother moved in an own flat, and I moved in with our mother and our little sister.

After living 18 years together, it was very awkward not to live with my brother in one room.

Apparently, it had some advantages too. But I never really saw the disadvantages when we lived together. I never felt 100 % alone. Even though my brother and I did not talk about problems often, when I was in bed, I knew he was a few meters away.

When our parents separated, it was a difficult situation for everybody.
Everybody coped with the new situation differently.

My brother and I spent less time together. We went our ways, different ways.

He got one of the best graduation marks in his university and is doing a Ph.D.; I ended up living in Spain.

As my big brother and I see some bad examples in our family how the relationship between brothers can be, we know what to avoid.

I miss the days with him at my side. Life was easier and safer and less lonely.
From sharing 19 m2 big room to 1414 kilometers of distance.

We don’t speak that much, especially right now as I am living in Barcelona.

We need to speak more, and more frequently.

You are the one human being I shared the most time around during my life.

It is time to get closer again.

Like Michael from Prison Breaks, I would go to prison for you. But as you are more intelligent than me, more probably I would need your help to get out of jail:D

“You grew up in the home beside me.
I always had a friend to call.
How could I make it here without you?”

Thank you for always being around, for being my role model.

I love you from the bottom of my heart.

I would die for you.

What is the value of a thing? The Jay-Z story

Why do Humans Love Dogs?