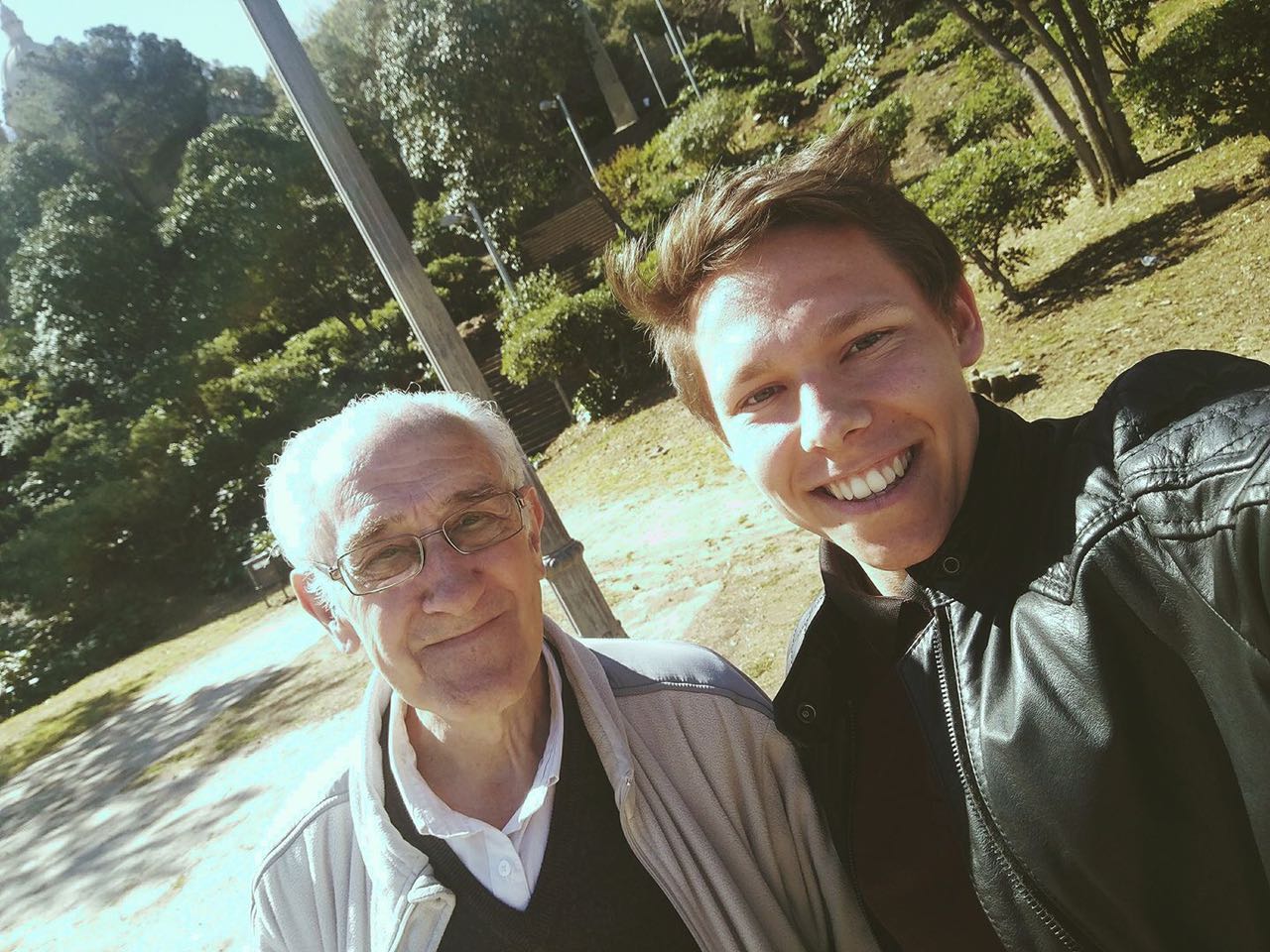 The old man at Montjüic

Making a new friend
and: the insanity of taking touristic, touristic pictures

Yesterday I made a new friend. Normally there is nothing special in making new friends when you are on Erasmus living in an international city like Barcelona. But yesterday it was special. I didn’t make a new friend while playing basketball or football, neither by working out in the gym, attending university, partying, or drinking in a bar.

I made a new friend by a chain of coincidence pairing with my curiosity and love for Barcelona, trusting my gut feeling and intuition leading me to an emotional conversation with a complete stranger.

Yesterday morning I got up late. After checking my phone, I checked the list of museums one can enter free on Sunday. No museum caught my attention. I remembered Brando Ranalli´s proposal to visit Joan Miró’s museum. I thought walking through the parks at Montjüic and visiting the Museum would make a perfect combination. I checked the schedule of the museum which urged me to leave immediately.

On the way to the museum I passed parc botanic and changed my plans. I entered the botanic park and enjoyed nature. After relaxing I wanted to get some water and food, because I left without eating anything. Having in mind a nice restaurant near the park, something inside of me wanted me to go another route than the nearest. Maybe subconsciously I just wanted to avoid going the most common, the most touristic route, to be able to maintain my relaxed state I earned during the time in the park. Taking the unconvential root I ended up on a square I haven’t been before. Curious I observed the new place when an old man caught my attention. He sat on a bench and watched his dog playing with some tourists who had abandoned the touristic route. His eyes were shining and full of joy.

I was fascinated by him and tried to follow his example, and sat down a few meters aside him, observing the things around us.

Two tourists were trying to take touristic pictures under a small triumphal arc. When you see new places, you are obviously taking pictures. But there is a group of tourists in this world, and I have the feeling, they get more and more in this Instagram and Facebook driven world, who are aiming to take touristic, touristic pictures. Touristic, touristic pictures I call pictures when people position themselves in crazy ways instead of just standing normal, like supporting the leaning tower of Pisa, so that it won’t fall down, standing one kilometer away from the Eiffel Tower and making it appear like they could touch the top… Pictures like that.

I often find it funny to watch them trying their best to get that one touristic, touristic picture. Sometimes jumping in the air brings another level into the world of touristic, touristic picture taking. And exactly that was the case for these tourists I was watching, and who the old man with his shining eyes filled with curiosity was watching as well. We watched the tourists third attempt. And then it happened. The tourist standing under the small triumphal arc put an artificial smile on his face and jumped with enthusiasm in the air holding his arms up, trying to get a perfect picture.

One moment later the old men laughed, I laughed, the tourist who took the photo laughed, just the tourist under the triumphal arc wasn’t. He was hurt and the artificial smile turned into an annoyed facial expression. Too bad for him that his enthusiasm has lead him hitting his hands against the stony roof of the triumphal arc. Too funny for us three watching his annoyed, painful face, defeated while creating a touristic, touristic picture.

The old men really enjoyed that scene, laughing and smiling without mischievousness, just because of the comic side of it. One minute after the tourists were gone, the old men called for his dog Bruno and took the stairs heading to his home. I got up too, following him with a few meters of distance. The old men had made an impression on me. An impression that made me wanna talk to him. Maybe the reason was the way his shining, curious eyes were observing the things around him. Certainly, it has been his sincere laugh about the comic scene we both have witnessed a few minutes before.

I started our conversation asking whether he is from Barcelona – he nodded. I asked him out of curiosity what his favorite places in Barcelona are. These two questions lead to an hour of conversation about Barcelona. First talking about Montjüic, and its beautiful nature side, then about the different districts and what makes them different, special and incredible. “Barcelona tiene todo.”, he told me summarizing his love for Barcelona. Indeed: Barcelona has everything. Those three words has always been my choice for describing Barcelona to friends and family.

Instead of shortly telling me his favorite place, he told me his whole story about his journey to Barcelona: growing up in a village near Tarragona, studying in Santiago de Compostela, finishing his study’s here in Barcelona. Since then he has lived here, working as a Spanish teacher and now enjoying his retirement.

Getting a compliment for my Spanish of him, as a former Spanish teacher, was special. We continued talking about half an hour and I shared my perspective about Barcelona, agreeing that this city is incredible, agreeing that possible the same will happen to me what had happened to him: that I will stay.

When the conversation came to an end, he introduced himself as Juan. Telling him that I am Jan, made us both smile. Juan and Jan, the similarity of our names made the chain of similarities complete.

To me the conversation was very emotional. The old men gave me the feeling of talking to a family member. Maybe it is just the fact that both of my grandfathers died before I was born, that got me so attached to him. Being miles away from my loving grandmothers supported my need and wish for talking to an older generation.

After having this 60 minutes of discussion about our shared passion for Barcelona, I asked him if he would mind to take a picture, so that I won’t forget this hour we shared. He agreed with a lovely smile. The lovely smile I am able to share with you through this picture.

I went away with a smile and full of love. I walked down the steps taking the direction to the restaurant to finally get food and water, turned around and waved with my right hand to the old men, who gave me his loving smile.

I turned around and just one thing was in my mind: hopefully I will see you again.

Walking is a gift

The bench – based on a true story